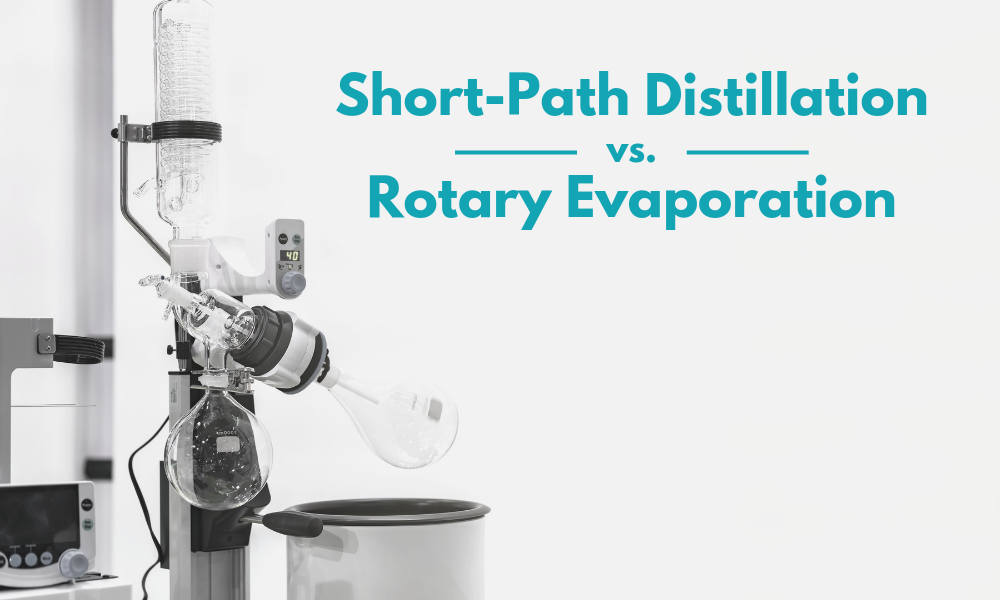 Short-path distillation and rotary evaporation are both common types of equipment used to extract THC and CBD from hemp plants. This simple guide will help you understand the processes and applications of both forms of extraction equipment.

According to the Royal Society of Chemistry, short-path distillation is “A method of separating mixtures based on differences in their volatilities in a boiling liquid mixture under reduced pressure.” Because it uses a lower boiling temperature, short-path distillation equipment is especially useful for separating compounds that are unstable at higher temperatures. It’s also beneficial for purifying small quantities of compound.

Short-path distillation involves using a heated flask to gradually increase the temperature of the extraction material that’s fed into it. As the mixture heats up, its vapors rise into a fractioning tubing with the aid of a vacuum. The vapors travel a short distance—often only a few centimeters—into the tubing before being condensed, which is where the term “short-path” comes from. Because the vapors only travel a short distance, minimal quantities of the compound are wasted on the sides of the equipment. After passing through the fractioning tubing, the vapors enter the condensing tube. Here, they are cooled by water in a recirculating chiller, which allows for their condensation. Depending on the weight of each fraction, they will be separated throughout the condensing tube into different receiving flasks.

Since their invention in 1950, rotary evaporators have served as universal pieces of equipment for gently and effectively removing solvents from organic, inorganic, and polymeric materials. According to Chemistry LibreTexts, “Rotary evaporation is the process of reducing the volume of a solvent by distributing it as a thin film across the interior of a vessel at elevated temperature and reduced pressure.” Rotary evaporators are one of the most popular tools for solvent removal due to their ability to quickly process large quantities of solvents with low boiling points. Rotary evaporation works by the mechanical rotation of a flask to increase the surface area of the solvent, which quickens the rate of evaporation and improves efficiency. This rotation is done under a vacuum, which reduces the solvent’s boiling point and helps remove the solvent from less-volatile samples.